1) Due to privacy concerns, the student's full name and personal details (such as Identification no) will not be revealed.
2) We faced difficulties in getting the report books of Primary School students as the report book was usually returned to the teacher before the holidays, unlike the secondary school students who get to keep them over the period of holidays. Hence, most of the results in this page will consist of secondary school students.
3) We DO NOT take credit for improvement in subjects that the child do not have tuition with us.

We are very happy to hear of Rabiatul's progress from F9 to B3 in her N level examination. Our online lessons were especially helpful to her during the circuit breaker period and she has overcome all odds to achieve great results. Keep up the good work! 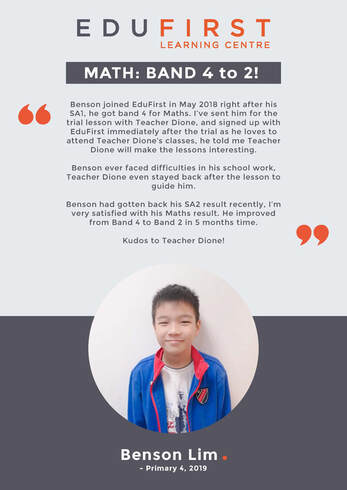 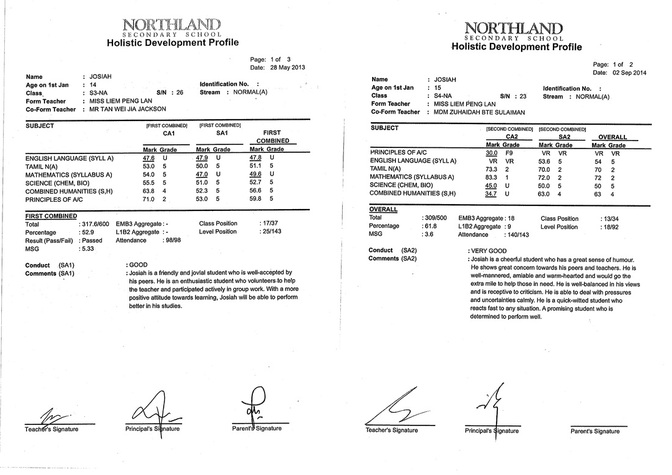 Josiah has never passed his Mathematics after Secondary 1.

At the end of Sec 2, he had only scored 25/100 for Mathematics. His Mathematics foundation and conceptual understanding was so weak that it would be an uphill task for him to handle the demands of the upper secondary Mathematics.

On the recommendation of his friends, this student decided to join EduFirst at the end of Secondary 2. Slowly, he was improving. He then started to pass Mathematics (Finally!) and was already very contented with his progress. It was a far cry from the rock bottom grades he used to obtain.

He was ecstatic when he achieved 64/100 for his Mathematics in the latest examination. It is a good improvement of over 40 marks from his lowest grade! Upon seeing the great improvement, his mother decided to enrol him for EduFirst's English tuition and Chemistry tuition as well. The tutor is working very hard with the student to aim for an 'A' grade for Mathematics in his 'N' Level examination. 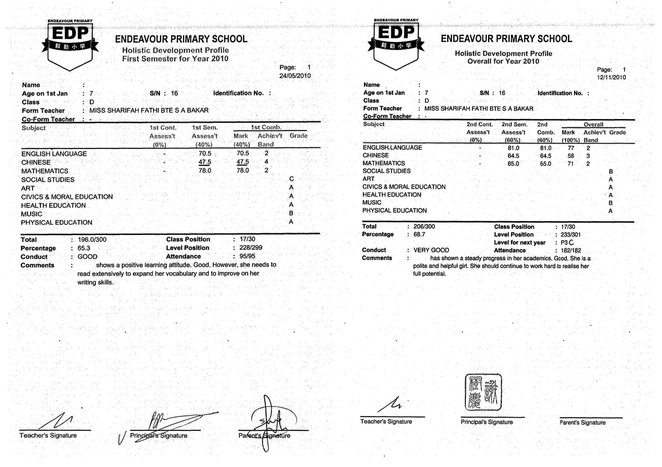 Chloe was extremely weak in Chinese. At primary 2, she failed Chinese, scoring only 47.5/100 in her SA1.

She joined EduFirst in July'10. After our tutor's guidance, we are very happy that she scored 64.5 in her SA2 results. 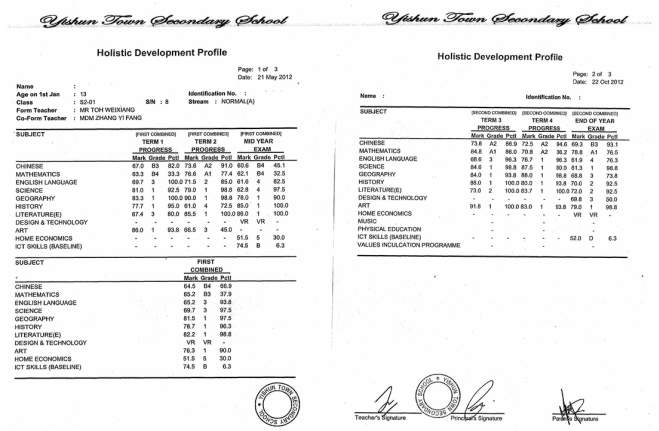 The small group tuition at EduFirst proved to be helpful for student. She received good guidance from her tutor and was able to work on her areas of weakness.

By the end of the year, she had managed to achieve A1 for her Mathematics in her SA2 exam! 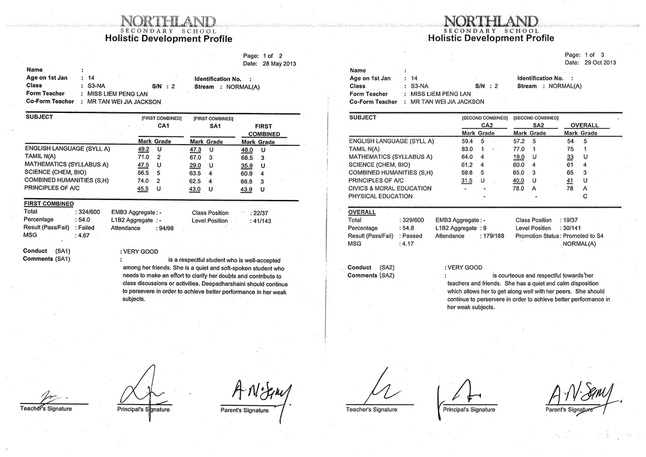 Deepa had been failing English since Secondary 1. She began to panic when she was still failing at Secondary 3 (with her 'N' Levels drawing closer).

She finally decided to seek help. She did not have much expectations of herself. She only wanted to PASS English since it is COMPULSORY for English to be calculated into the EMB3 score needed to proceed from 4N to 5N or to direct admission to the Polytechnic Foundation Programme (PFP).


At EduFirst, her tutor worked on her area of weakness. She was taught skills and techniques on how to tackle comprehension questions. Her tutor had also worked on her essay writing skills.

In the end, she had gotten more than she asked for! In the quick span of 4 months of tuition, she managed to achieve close to 60/100 for her English. 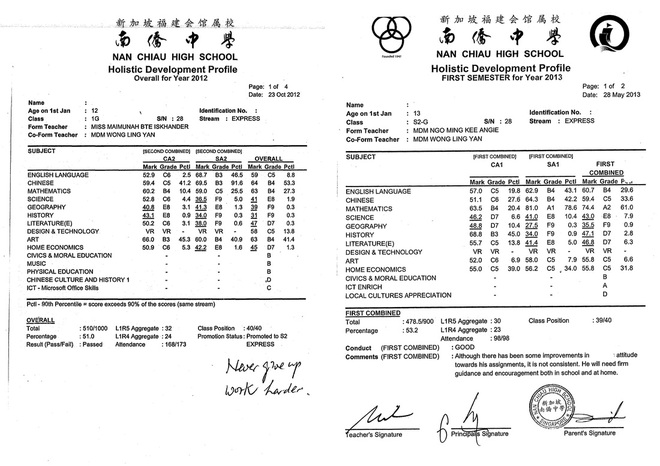 At Sec 1, Kleeve was scoring C's and occasional B's in his Mathematics. By early Sec 2, after his CA1, his mom was sensing the urgency to seek help because Mathematics is an important subject for the streaming year.

It bothered her very much that her son was a laid-back student who only played games at home all day.

Kleeve then joined EduFirst for Mathematics tuition. Of course, it was not an easy task especially when the student is not motivated on his own.

The tutor at EduFirst focused very much on working student's foundations so that he could have good conceptual understanding of the topic. Thereafter, the tutor also drilled him on the exam-style questions to help prepare him for his examinations.
Academics aside, the tutor had also given him a lot of encouragement, showered him with praises generously and constantly motivated him to study hard.

Student eventually managed to score a whopping 81/100 for Mathematics by SA1! Just in the span of 2 months! 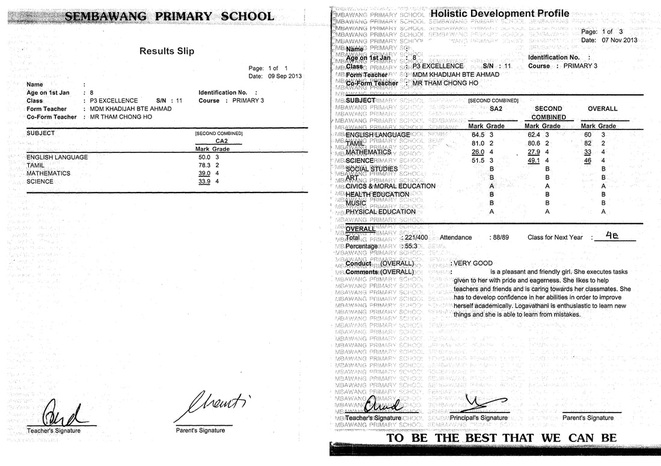 Loga was achieving borderline passes for English and failing Science for first half of the year.

When she joined EduFirst, the tutor worked on her English grammar and vocabulary intensively because she was clearly weak in that aspect and lost many marks in that component. She was also lacking in composition writing skills. Her storyline was in an illogical sequence, incoherent and had a lack of climax.

The tutor was very patient with the student and targeted on her weaknesses.

Science was a new subject to the student and she could not visualise many ideas and concepts that she had learnt in school. The tutor identified the above as the main problem that has contributed to her lack of understanding in the subject. As such, the tutor prepared videos to explain science concepts, conducted simple experiments to help her observe the work of science, as well as showing many pictures of new things that she has learnt for the first time in school (ie, different types of flowers, plants, animals, etc)

By the end of the year, student saw a huge jump in her English and Science. Her mother was so happy and gave the tutor many boxes of festive cookies! Tutor is very confident that her progress will only be heading one way - upwards. She will only get better. 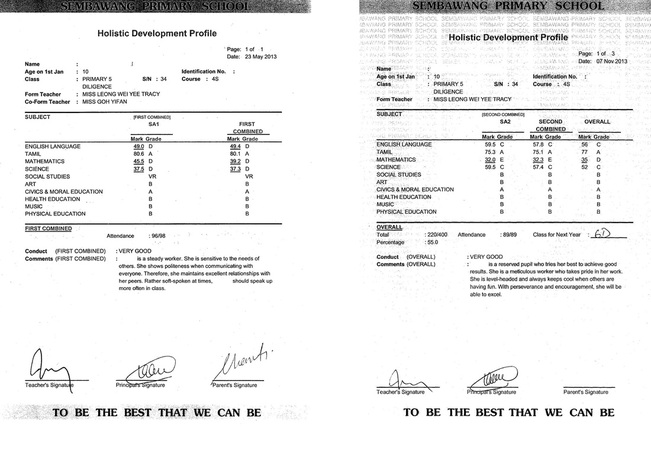 Thurga failed her English and Science badly during her SA1.

Student is a very keen learner. However, she needs very close guidance and much more time to understand concepts. In a bid to help her to improve, her tutor dedicated extra time and effort to teach her by giving her extra lessons to boost her grades.

Thankfully, both their efforts paid off. Student saw a great improvement in her results! Her mother was so pleased with the improvement! 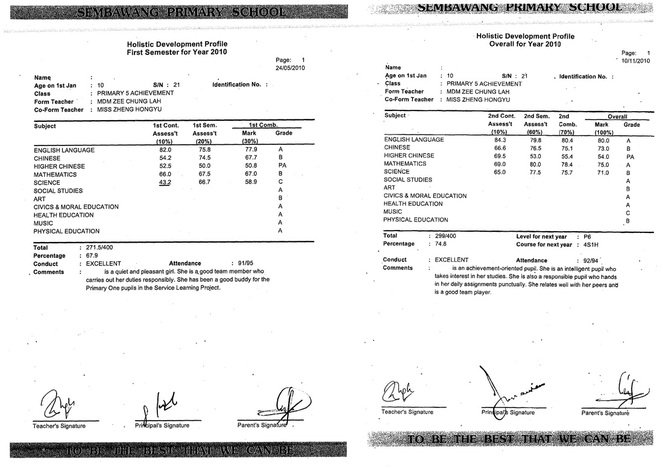 Nicole first enrolled in Mathematics and Science tuition with EduFirst after the release of her SA1 results. Her mother was very concerned with her results as she would be sitting for PSLE the following year. She failed Science and was managing 60's for her Mathematics.

After assessing the student's weaknesses, the tutor decided that the best approach is to work on her Science is to expose her to exam-style questions and to teach her how to answer open-ended questions using the right key words and the right techniques. As for Mathematics, the tutor taught her heuristics and drilled her on problem sums since her conceptual understanding was good.

In a short span of 4 months, She managed to improve by leaps and bounds, and did well for her SA2 exams. Pleased with her great improvement, her mother decide to enrol her for Chinese tuition classes as well. 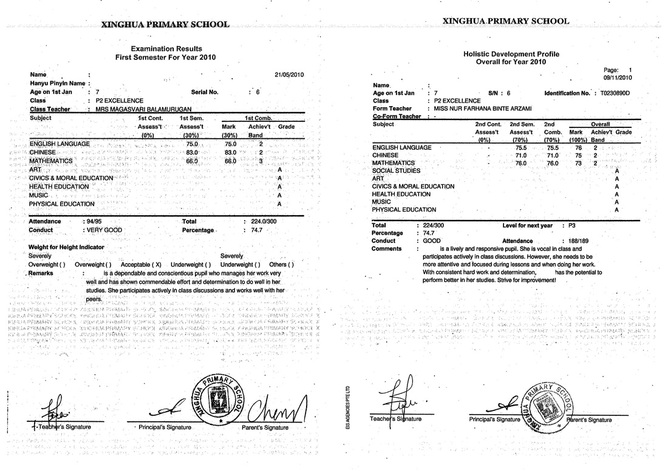 Mabel joined EduFirst due to the poor grades she obtained in her SA1 Mathematics examination.

The small group size proved to be effective for the student. The tutor went through her corrections individually with her, and drilled her on exam-style questions using EduFirst's materials.

In a short span of 4 months, she showed an improvement with a jump in a grade. 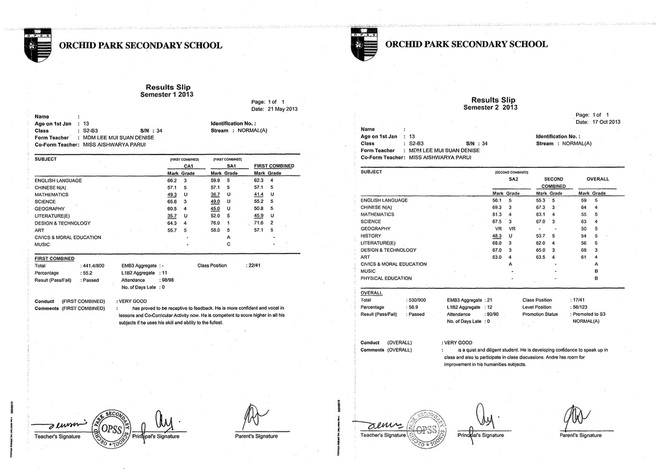 Andre enrolled in the Mathematics and Science tuition. It was his streaming year and he failed those 2 important subjects at SA1. He is a very quiet and shy boy, so his mother wanted a comfortable learning environment for his son.

In a small group setting, it was very easy for the student to raise questions to ask the tutor. He enjoyed the small group interaction and liked the learning environment EduFirst offered.

Andre was a keen learner as well. Coupled with the help of his tutor, he made good progress by SA2. We are glad to have salvaged his grades and helped him to get a desirable subject-combination of his choice at Secondary 3. 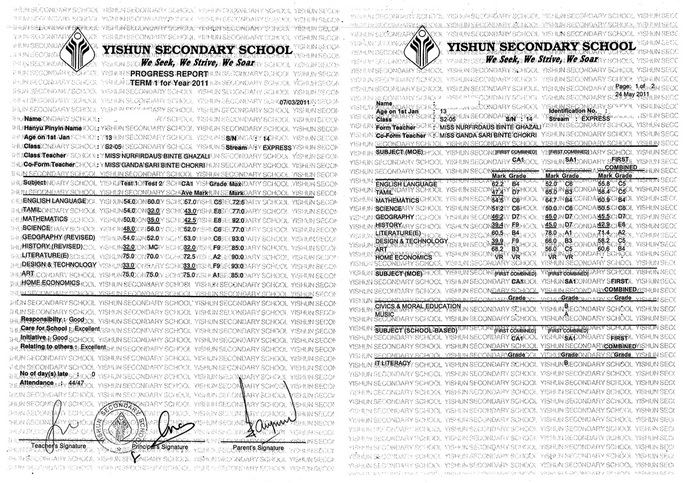 Mohashini student joined us when she obtained a F9 for her Mathematics in her CA1.

She was utterly confused with the positive/negative integers, as well as Algebra. The effect snowballed, and she soon lost interest in Mathematics.

Her tutor motivated her to try hard. Student was, in fact, a fast learner. With very close guidance, by SA1 she scored 64.7.

Our other students with commendable results

Pow Jia Rong (S1-S2)  from Normal (Academic) stream and advanced to Express Stream, due to good improvement in his English and Mathematics.

Brayan Liow (S1-S2) awarded Edusave Scholarship for being the 10% of his cohort. He took 4 subjects (Eng, Chi, Math & Sci) with us.

Phua Qian Hua (S4E), joined EduFirst with a C6 in Chemistry and eventually achieved an A2 at her O'levels.

Weng Xin Xin (P1-P4), consistently maintained Top 3 positions in her class over the years. She takes 4 subjects with us.

Lim Wei Jie (P6), progressed from B in Science during school prelims to an A* in PSLE. He took Science tuition with us.

Wynne Sim (P6-S2), top 5 scorers in her school for PSLE having achieved an aggregate score of 261/300. She is currently in NJC (IP). She took Maths & Science tuition with us.

Tan Hui Wen (S4), achieved distinction A2 in Elementary Mathematics after having E maths tuition with us.

Tricia Lim (S4), achieved distinctions A2 in both Elementary Mathematics & Additional Mathematics. She took both A Maths & E Maths tuition with us

Christopher Choong (S4), he was forced to drop A maths because he used to fail so badly (F9). He achieved a B3 in O'levels and is currently studying in a JC.

Yogi (P6), has been failing English and managing borderline passes for Maths. He finally passed his English in the latest SA1 examination and scored 85/100 (the highest in class) for Maths! He was also awarded Edusave Bursary Award in 2012.

Shahfizan (S4), had never passed Maths. He is finally passing Mathematics after he joined EduFirst. He is aiming a B for his N' levels now. He was also awarded the Edusave Bursary in 2012.

Goh Dai Ying (s4NA), who has been scoring around B's for Chinese, has obtained A1 in her 'O' Level Chinese examination!

Daffaa (S2E), he came for tuition with F9 in science. In 2 month's time, he made such a huge progress and scored B3!